Dan Smyers and Shay Mooney, better known as their stage name, Dan and Shay, are rising in the charts and in the minds of country music fans everywhere.

Like most successful country acts the duo got their start in Nashville. For five years Dan and Shay have been grinding, releasing music and touring the world with some of the biggest country acts in a supporting role. Now it is their time to shine.

Songs such as “Tequila” and “Speechless” in 2018 helped put the duo on the map. Both songs hit number 1 on the US Country charts and the country music scene was hooked. Armed with a piano, an acoustic guitar and two superb voices, Dan + Shay is enjoying a trajectory much like other current country superstars. Their rise to fame was justified at the 2019 Grammy Awards when they were nominated for Best Country Song and won Best Country Duo Group Performance.

A recent boost to their stardom came about when they recently released a song with pop icon Justin Bieber. The song, “10,000 Hours” made streaming history.

“10,000 Hours” peaked at No. 3 on this week’s Billboard chart, where it racked up 33.3 million streams. Before the release of “10,000 Hours,” the highest-charting non-holiday single from a country duo on the chart was Florida Georgia Line‘s, “Cruise,” which featured rapper Nelly. The song reached a peak of No. 9 in 2013.

Following the success of that song, Dan and Shay immediately announced a 2020 arena tour. The tour kicks off with two shows in Nashville at Bridgestone Arena before moving to every major city in the US. Fans can also see Dan and Shay in a headlining capacity at the epic country festival, Stagecoach. Don’t miss the chance to be a part of Dan and Shay’s meteoric rise! Find your Dan and Shay tickets today at TicketNetwork!

The CMAs: What It’s All About

The 50th Annual Country Music Awards (CMAs) show is Wednesday, November 2nd. Though the temperatures are starting to approach freezing, the American love of country music is strong enough to push past the end of warm summer nights. Over 6,000 industry professional members of CMA choose the CMA nominees and winners. It is the longest-running annual music awards program on network television.

The 2016 CMAs have two hosts: Brad Paisley and Carrie Underwood. Both are well established country stars who have co-hosted the CMA Awards Show together in the past. The familiar role is something that they both look forward to returning to. On the official CMA Awards website, Underwood states, “Each year, we work harder, so that we can help present the best show possible.” The CMAs are country music’s biggest night, garning the diverse genre talent and bringing it together to recognize their achievements.

In addition, this year is particularly special because it is the 50th anniversary of the awards show. In honor of the huge anniversary, country stars collaborated on “Forever Country.” This is a mash up of three popular country classics: John Denver’s “Take Me Home, Country Roads,” Dolly Parton‘s “I Will Always Love You,” and Willie Nelson‘s “On the Road Again.” The song’s music video features a multitude of country singers new and old – it is the pinnacle of what the genre is so great at: collaboration and community. The CMAs will air live from inside the Bridgestone Arena in Nashville (really, where else would it be?) on ABC at 8/7c.

The CMAs: What to Expect

The CMAs have always been known to bring an intense performance level to the stage that also drags along phenomenal surprises. At the 2015 CMAs, fans found out Justin Timberlake was going to perform a collaborative mashup of “Tennesee Whiskey” and “Drink You Away” with Chris Stapleton just hours before the show. The performance that lasted a little under ten minutes brought the entire crowd to its feet. With an audience of that country calliber, that action alone demonstrated the collabartive performance’s high quality. Therefore, The audience is expecting another possible surprise this year, and everyone is waiting to see what brings down the (farm)house this year.

The CMAs: What Wasn’t Expected

Many of the nominations this year surprised the country scene. Particularly, the singer-songwriter Cam was left out of the Female Vocalist and Best New Artist categories. Maren Morris has seemed to take her place, and many wonder why Cam’s Grammy-winning “Burning House” would then cause her neglect at the CMA level. Morris is a little more shiny and new to the scene than Cam, but both brought an extensive swing to the female country artist area over the past year.

In addition, Kacey Musgraves is another fresher talent who actually grabbed a surprising nomination. Her critically-aclaimed Pageant Material has struggled to make the mainstream radio surge that her previous album did with its popular singles. However, Musgraves still snagged a Female Vocalist nomination. Hmm.

Blake Shelton, a hugely popular country artist, seems to be losing steam. His album If I’m Honest dropped in May following his divorce with Miranda Lambert. He gained no attention from the CMA voters for the album. Though this is shocking due to his normal winning streak at the CMAs, it’s not exactly unfair. Consequently, his single “She’s Got A Way with Words” received radio play time, but the song is flat. Its disses and cheesy one-liners are just that: insulting and corny. Whether or not the song aims at Lambert, Shelton’s his album shies away from songwriting creativy and leans more towards over-produced teamwork that left Shelton’s genuity behind. Furthermore, “Came Here to Forget” is another If I’m Honest single that carries more weight but not enough to force him in the 2016 CMA ring.

On the other hand, Carrie Underwood received a nomination for Entertainer of the Year, a feat that many fans have been waiting for. Underwood hosted the CMAs previously and is again, and with her country starlet status, this nomination seems fitting. Glitter and all.

Kenny Chesney is also making exciting CMA headlines. Chesney will receive the Pinnacle Award. It “recognizes an artist who has achieved global prominence through concert performances and record sales at levels unique in country music and has also attained the highest degree of recognition within the broad expanse of music worldwide” according to a Country Music Assocation press release. He is only the third recipient alongisde Garth Brooks and Taylor Swift.

Nominations and Our Result Predictions

Entertainer of the Year

Album of the Year

Single of the Year

Song of the Year

Female Vocalist of the Year

Male Vocalist of the Year

Vocal Group of the Year

Vocal Duo of the Year

New Artist of the Year

Musical Event of the Year

Music Video of the Year

Musician of the Year

The 51st annual Academy of Country Music Awards, also known as the ACM Awards are set to take place this Sunday. Last year, award show organizers switched things up by hosting the event at the 100,000 seat AT&T Stadium in Arlington, TX, instead of its usual home at MGM Grand Garden Arena in Las Vegas. In 2016,  the award show will be back at its familiar home in Las Vegas, but that doesn’t mean ACM Awards organizers weren’t able to figure out a way to switch things up… This year, awards are open to musicians of all genres, not just country music. Let’s take a look at the 2016 nominees for the three most prestigious ACM awards:

As you can see from the list above, no country stars were nominated for top awards, which has outraged thousands in the country music community. To make matters even worst, artists who haven’t put out new music in years such as Billy Joel have been nominated for awards ahead of country artists like Luke Bryan and Eric Church who both released chart topping albums in 2015.

“We knew this would create a stir,” said a member of the award show committee who wished to remain anonymous, “However, as with all music, country is just different sounds slapped together. By looking at it from this aspect, one could argue that all music is country music, which is the approach we took when deciding the nominees for this year’s award show.”

When asked about nominating artists who haven’t released new music in years, the committee revealed that they pulled names of older musicians out of a cowboy hat, as they wanted to include artists who would not have been eligible to receive ACM Awards prior to 2016.

Luckily for country fans who are still reading, this is all an April Fools’ joke, and this year’s ACM Awards are set to feature all of your favorite country stars. Take a look at some of the nominees below: 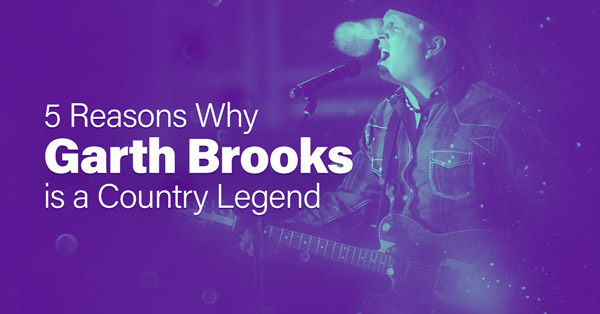 Garth Brooks and his wife Trisha Yearwood will be extending their major headlining tour into the New Year, as the pair is scheduled to play 12 dates in the U.S. beginning January 14. The tour leg will stretch out until March 12 when it will wrap in Raleigh, North Carolina after two performances, marking the first time in 18 years that the country star will play there live. After the winter tour finishes, the dynamic duo will play an eight-date residency in Las Vegas beginning in June. With less than a month until the tour dates launch, tickets to see Garth Brooks are averaging $176 for all scheduled dates. The high price point proves that despite nine years of inactivity, Garth Brooks is a country music legend that won’t fade out. Here are five fast facts about Garth Brooks:

1. Garth Brooks’ Ropin’ the Wind became the first country album to ever debut at No. 1 on the Billboard 200. It dethroned Metallica’s 1991 self-titled album from the top of the list. It went on to become the best-selling album in the U.S. with 16 million albums sold.

2. The only solo artist to outsell Garth Brooks is Elvis Presley, who has sold over 128 million records. Brooks’ 1998 album, Double Live, is his most popular record and went 21x platinum after its release.

3. Garth Brooks is a touring machine. After three years of touring in support of his 1998 album, “Sevens,” the singer grossed more than $105 million, making it the first country tour to draw over $100 million. Even more impressively, he charged just $20 per ticket.